If you’ve answered YES to any of the above, don’t worry,
you are not alone.
The vast majority of parents want their boy to learn these skills too, but just maybe aren’t quite sure how.

However, your boy can learn from quality mentors, because truth be told, there is a way.

Keep reading to find out more…

Here’s what your boy will learn at The Lads…

In the workshop “The Lads” will learn…

5 Habits of Happiness, that can lead to resilience & happiness.

The skill of reframing. Using gratitude & empathy to see a situation or event in a more positive way

How to be of service and value to others.

How to deal with bullying.

Ways to increase their mood to a more positive Through games & fun and engaging practical education sessions.

Like A Skill In A Sport, Resilience
Can Be Practiced.
We Show The Lads How. “The Lads” Workshop educators are leaders in their field. We also understand people learn in different ways, therefore we use a variety of teaching techniques to accomodate. The workshop is evidenced based and combines physical activity and positive psychology principles to ensure our workshop is fun and engaging.

Growing With Gratitude “The Lads” has been developed in response to our school & sports program success & parent requests. Parents have expressed, they want their son learning skills that will go towards building and protecting their mental health, overcoming challenges and adversity, as well as learning to be a great citizen.

The workshop is specifically designed for 8 – 11 year old boys, by an experienced primary school educator. This age range can be challenging for boys and often are unsure how to handle different situations.

We are in the game of intervention. Meaning, we genuinely care about the wellbeing of our young people, therefore we aim to equip them with the skills needed to handle challenging situations by helping them develop key social and decision making skills, so they can call on their skills to use before an issue escalates. The great news is? Just like teaching and practicing a skill in a sport, we can teach and help young people practice to be resilient. We show the boys how in a fun, engaging and safe environment.

REAL STORIES FROM “THE LADS”

As a mum of a boy who attended “The Lads” the immediate response has been amazing, asking to help out all afternoon and willing to help when asked…I am so grateful to all involved!! All I have to do now is learn from Isaac and start it all in our home!!! 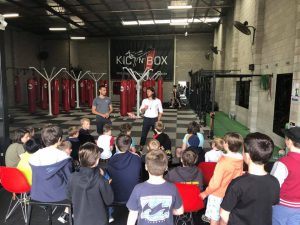 Thanks for a great day. Callum had a great time and shared all he learnt today with both my husband and I. A very worthwhile session 👍🏼👍🏼😊😊😊 Highly recommended.

Thank you for having Darcy and Cohen today. Both the boys have been practising what they have learnt at “The Lads” and it really reflects the true impact that today had on them. Now to keep the training up at home, thank you for all of the fabulous resources. WHO’S BEHIND “THE LADS” In 2010, while teaching as a primary school physical education teacher in Adelaide, South Australia Ash discovered a number of people who excelled in their chosen field identified gratitude & happiness as the key to their success/achievement.

Through further investigation he discovered an entire world he didn’t know existed. This was the world of positive psychology. His greatest learning was that happiness is something you can actually practice. After personal break throughs in his own life, he realised he could have learnt the skills he developed in primary school.

Ash left primary school teaching and decided to combine his skills as a teacher with the principles he learned that lead to his break throughs and created Growing With Gratitude. A global positive education/wellbeing program that helps to build and protect children’s mental health.

Growing With Gratitude focuses on teaching children skills based on gratitude, kindness, empathy, mindfulness & serving others, they key building blocks to resilience & happiness.

Today, Ash is widely regarded as a leader in primary school positive education around the world. Growing With Gratitude literally reaches 100’s of thousands of students across the globe and is currently accessed in 45 countries.

As a result of Growing With Gratitude’s success, GWG now also works with corporates and sports clubs.

Ash is also Director of Be Intent Educators, a technology tool that, helps educators get into the right head space every single day and increases, emotional, mental and physical well-being.

He is also School’s Director of the Universal Classroom Project (non-profit enterprise). A movement, where leading influencers in mindfulness, positive psychology and self development worldwide, as well as dedicated mission driven activators and practitioners are coming together to collaborate on finding the simplest solution to make mindfulness mainstream in schools.

CLICK on your nearest city below to BOOK NOW, before spots run out. MELBOURNE
COMING SOON
You’ll be the first to know when we are coming to Melbourne. BRISBANE
COMING SOON
You’ll be the first to know when we are coming to Brisbane. SYDNEY
COMING SOON
You’ll be the first to know when we are coming to Sydney.

Our mission is to continue to impact the most children in Positive Education in Australia and now it’s time in THE WORLD (if we arn’t already) through our Schools and Sports program. We do this by partnering with organisations and people who want to make a positive difference in the world. Power in numbers. We offer a fully resourced, easy to implement, fun and engaging approach. We ensure our schools, teachers, sporting clubs and coaches are fully supported. Furthermore we are teaching young people skills to overcome adversity and challenges, as well as teaching them to be great citizens. The result – our schools and sports clubs build a grateful, kind, emapthetic, resilent and happy environment.